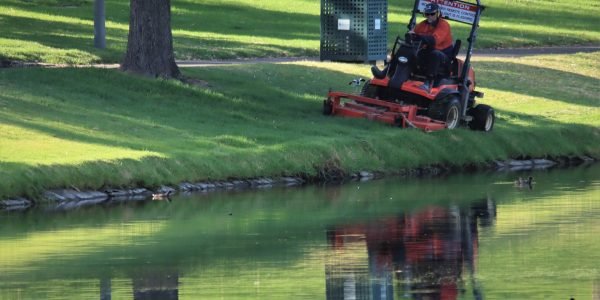 In the early morning hours of April 28, 2020, a lawn maintenance worker was operating a ride-on mower, cutting grass approximately 10 feet from the edge of a body of water. His body was found later. He had drowned.

There were no witnesses to the accident, but the police estimated the mower driver had changed trajectory while cutting grass to avoid a large plant. The change in direction put the operator and the mower within 5 feet of the nearby water.

Based on observation of the police department’s body-cam video and examining the mower, it appeared the mower’s left tire ran into soft soil on a steep slope, causing the mower to roll over into the water. It also appeared that the mower’s roll-over protection structure had not been upright at the time of the accident. Additionally, the worker was not wearing the mower’s seatbelt.

When a worker is hurt or killed on the job, he or she, or the worker’s family may seek compensation from the employer. Workers’ compensation benefits cover the cost of medical care, and wage loss while recovering. If there is a death involved, weekly benefit payments are 70 percent of the weekly wage of the deceased worker. The benefit is divided by the surviving dependents, determined by a judge after a hearing.

New Jersey law mandates that employers have workers’ compensation to cover employees for illnesses and accidents in the workplace. Workers’ compensation insurance can be obtained via an insurance agency or provider. There is also the option to self-insure, which must be approved by the New Jersey Commissioner of Insurance. This means the employer finances the insurance to cover work-related injuries, and accidents. To apply to self-insure, the company has to prove it is permanent and financially stable enough to pay compensation to sick or injured workers.

Death benefits include payment for approved medical bills and up to $3,500 for funeral expenses. Funeral expenses are either paid to the deceased worker’s estate, or to the person who is paying for the funeral and burial.

Weekly death benefits are based on the deceased’s wages and the number of dependents in the family. The following rules apply:

The rules regarding death benefits for dependents are complex. Retaining an experienced workers’ compensation attorney is the best course of action to determine what benefits may be payable in a claim.